The man behind the Ultra Van

How it was in the beginning

Like many who acquired Peterson’s Motor Home I too made a second scan of something I saw a block away on the side street driving down the main drag in North Hollyowod to my boat slipped in the Long Beach Marina. This Motor Home was something different, and when I spotted the size 13 inch wheels I knew what it was. Working at Lockheed #89 as a flight line crew chief, I knew I was looking at an all aluminum, handmade, Motorhome with those small wheels and the wide track. Parked in front of the Chevy dealer – Peterson stopped to get some Chevy parts.

The Motor Home was surrounded by people and there was lots of talk. Peterson was handing out a sheet of typewritten information that showed a price of $4700. He had just put it on the road and drove it here to show his daughter living in my town. With all the people milling around the car it took me awhile to get to Peterson to ask a few questions about this most unusual car. I learned he was located in Oakland and it was to be hand made there. He particularly Showed me the storage cabinets. I later found out he started out as a cabinet maker. At that time of 1961 the Chevy Corvair engine he was using was 80 horse power was puzzling. Anyone would have guessed a big Motor Home like that would need a V8 to climb a hill. Peterson’s aircraft talk “Horsepower to weight ratio” was unheard of to the general public.

I already have gone the route of putting an interior myself in a VW van to make a camper which was short on head room for a six foot, three height. What I saw looked very ideal to me. I had just put all of my available funds into my sailboat, so thoughts of a Motor Home had to be shelved.

About a year later we made yearly visits to Seattle and stopped by the tin building in the industrial area of Oakland to see Peterson. With the help of a couple of friends and his wife doing the stitching of making the upholstery work they made a few Ultras. At that time he only had a few components in process she was working on. During our talks he kept rubbing the front suspension casting he was holding to show his pride and joy. I still could not think of being able to buy a complete unit but asked if it would be possible to buy his castings and some components to be able to build the Ultra in my back yard. I had made a few things in my shop in the rear of the garage and thought with a few of my aircraft friends riveting I would be able to do the difficult job. Th, strongest structure for its weight is a box. Peterson showed me in the components each wheel is housed in an aluminum box. Then all the boxes are tied together in the shell of the structured skin of the car body. Making the whole unit flexible, At Lockheed we were the first to build a wing structure and then seal the interior to make a leak proof tank to contain the fuel. previously a tank was made and installed in the wing bays,. In the early Ultras Peterson made a riveted box which he sealed to make four structural tanks that were tied into the hull. This made a much lighter replacement of the automobile chassis of that time.

After an early struggle of a few years and building a few Ultras, Peterson realized it would be necessary to turn over the production job to some going organization to produce the Ultra in a larger scale.

It took several attempts to turn over the production job to someone else that could make a successful job of producing an Ultra. in a subsequent visit to the Oakland facility I found Peterson dejected and learned that the one completed Ultra there was one of the unsuccessful Units that were built by Prescolite that took on the job of producing the Ultras. They built a few not knowing aluminum construction methods substituted aluminum with angle iron which then caused major cracks where the iron was mated with the aluminum skin. This caused the shutdown of their Ultra production… Peterson told me the unhappy owners of this Ultra looked up Peterson to see if he could help him replace the goofed up failed parts of the Prescolite failed blunder. Peterson agreed to let the unhappy owner use his facility to make the necessary repairs using aluminum materials. Peterson said the angle iron used was causing the cracks because the aluminum gives and flexes. At the time Peterson had said that he would consider selling the castings and some components to me. After the debockle he had with Prescolite he said the Ultra would have to be built by aircraft knowledgeable people.

Some time later I happened to be in conversation with my college classmate, Dick Werth who was vice president of Pacific Airmotive in Burbank where they did aircraft repair and made production parts for a helicopter. At that time their main operation was a conversion of the Convair transport of replacing the reciprocating engine with the Allison turboprop. Peterson contacted Dick with hope that Pacific Airmotive would take on the job of producing the Ultra. Dick Looking over Peterson’s Ultra he reluctantly told Peterson that he would assign one person and give him one hour to quote a figure of what it would take for them to build an Ultra to aircraft standards. Three hours later and with two more people assigned, Dick told Peterson they could build his coach for his cost of $25,000 per unit… This was more than a shock to Peterson.

Some time went by and the word of Peterson’s Ultra was known of at the Lockheed plant and they knew I was interested in that Motor Home. Much to my surprise one of my fellow workers showed me a well done brochure shoing the Ultra Motorhome being built in Hutchinson Kansas. After seven years of ownership of my boat I sold it  and sent a $250 deposit to have an Ultra built for me. I made a visit to see the beautiful wooden, former Navy, wartime, hanger where the Ultra was being built. They had 78 people on the payroll and the average pay was $2.78 per hour at the time. The Ultra was priced at $8900.00 I had 18 years of enjoyable ownership. 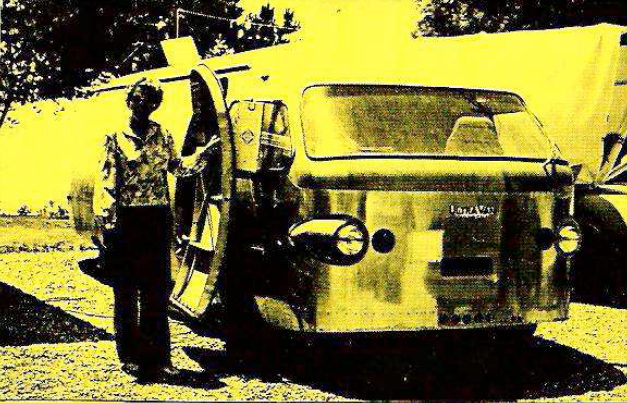 This award was prepared to be presented to Dave Peterson at the 20th anniversary National Ultra Van Rally., which Dave was unable to attend. This is his response to being presented with the plaque, "What a surprise to receive such a beautiful plaque. It will continue to remind me that a bug bunch of people really do appreciate my efforts, a satisfaction to be so honored. Christy Barden made quite a presentation, lots of pictures, even with me in the left seat of a Boeing 727 that he was flying for Continental Airlines. Thanks to all club members. We are so sorry that we were unable to make it to the greatest rally of them all. We need to get our lives less complicated so we have time for the really important things."

Extracted from the UltraSounder newsletter 2000-2 written by Jim Craig

Extracted from the UltraSounder newsletter 2001-1, provided by the 2001 Historian, Norm Helmkay, from email correspondence to Ken Widman, 2001 Webmaster. 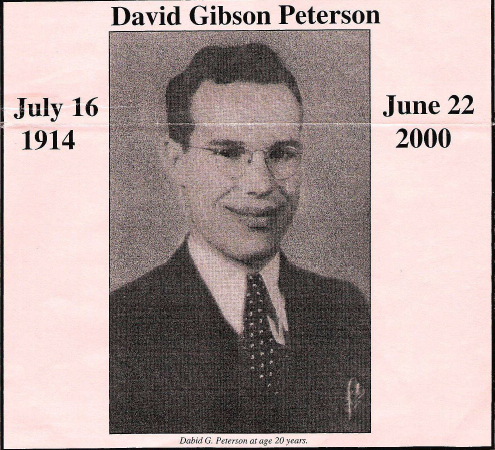 We all have had him touch our lives in one way or another. We will always remember him as an enthusiastic, hard driving, ingenues person, who made it through the hardest of times. He always had a way to get something done, make it work, of figure things out. We all respected his notion that is still way ahead of its time.

Our condolences to his family, and the woman that made a lot of things happen in his life, Lucille. She did so many behind the scenes activities, that we will never know just how influential she was. His wife, Lucille, son David L. Peterson and daughter Patsy Hussman, 5 grand children and 5 great-grand children survives him.

Lucille said the last year they had together was enjoyable, not only to her, but to David as well. Because he had accepted his condition he was able to enjoy their new life  at their new home in San Rafel, California. Lucille misses him greatly, they had just celebrated the 65 wedding anniversary the week before. She was happy they did have this last year together, taking walks, having dinners and just being together with out a lot of business stuff to get in the way.

Some how the world has change d a bit without the great David Peterson smile around.

Because he has effected our lives so, we honor the position he holds in our community. He was our chief, our head guru, and the guy who knew what it was all about. We lived in, loved and drove his creation, the Ultra Van. The world has changed a bit now that he is not here, but has left a lasting legacy, the Ultra Van. These vehicles are now between 30 and 38 years old. Only about 365 units were ever built between 1961 and 1970. The Winnebago built over 250,000 motorhomes, which was more than any other manufacturer. The difference between the two is noticeable, uniqueness! The Ultra Van is still way ahead of its time, a body that weighs just over 2,000 pounds, without interior installed. A shape that the airflows around, a full body pan (the early ones) that reduces the coefficient of drag. Recycling of gray water through the macerating toilet uses a garden hose to empty the holding tank. Uses the front compartment efficiently as a driving area, eating area and sleeping area. The lowest profile of any Recreational Vehicle built. AND the best mileage you can get with a vehicle of this size. An interior the size of a space ship, with the biggest KING size bed in the industry. This is the legacy of David G. Peterson. He built a vehicle, which will last well into this century. When the internal combustion engine is no longer available, we will use electricity to run motors at the wheels, using a hydrogen engine, with solar panels the large top of the vehicle. He created a cult vehicle. Ordinary people will not be driving this maching in 50 years, only people who have the appreciation and ability to operate this machine will have them. Our job is to take care of them, so in the year 2050 a young man with a dream and lots of energy will have one to restore and modify and use and he travels the country to find out where he fits in this society. So that is our challenge, to keep as many of them running and alive so that others will be able to remember David Peterson with a fond smile of thanks.