A Chapter of the Corvair Society of America

A history of where we came from

The idea for Group Ultra Van (GUV) was hatched at the 1980 Corvair Society of America (CORSA) convention in Denver, Colorado. The master of ceremonies, Christy Barden (UV228, 603), called out the Chapters from the podium including two special interest groups, Corvanatics and Lakewoods. Why not a special interest group for Ultra Vans?

The by-laws allowed any person interested in Ultra Vans to join the membership. Annual meetings were to be held at CORSA’s National Convention and provision for a newsletter was made to be sent to all “current members and to such other persons or organizations as the officers shall approve”. Whales on Wheels (WOW) was published for twenty years by editor, Christy Barden, who almost single-handed supplied on going information on technical subjects as well as interesting historical facts. Old Cars Magazine named WOW a winner of the Golden Quill Award on three occasions, recognizing the quality of his work. Recent editors have been noted author Richard Finch (UV443), much traveled Walt Davison (UV366) and our current President, Bob Galli (UV504).

The January 82 issue of CORSA Communique shows UV435 for sale as well as over six pages of Corvairs. GUV first appeared under the Chapter Listings in the March 82 issue. In the May 82 issue there were listings for upcoming Ultra Van Rallies in Blanchards Island, Ill. and Knoxville, TN. June 82 had a report on the Cactus Corvair Clubs Phoenix Mini convention where an Ultra Van won in the concours event.

In the CORSA Communique 10/82 Christy explained …GUV was formed to make an official connection with CORSA since it’s my feeling that most of these vehicles will wind up in the hands of CORSA people. We are mainly a technical organization, exchanging ideas that help to keep them running. 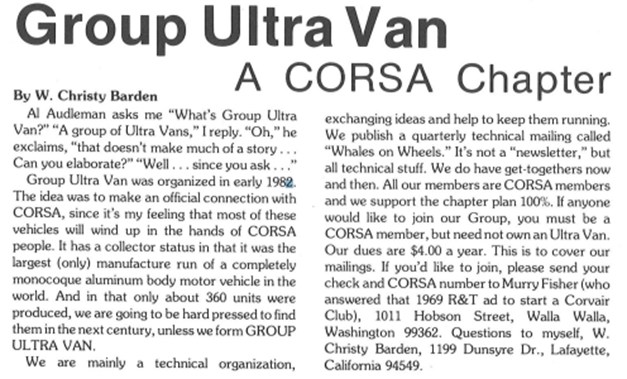 GUV meetings have been held on a regular basis at CORSA National Conventions. Provisions were made at the 1982 convention in Syracuse, NY, for self contained campers to stay in the parking area of the convention facility. Ultra Vans are encouraged to attend all CORSA events as part of the family.

GUV was combined with UVMCC at the end of 2005. GUV’s newsletter name, Whales on Wheels (WOW), was retained.